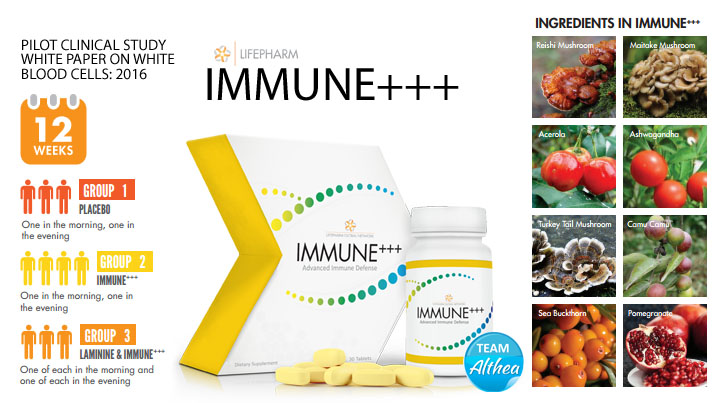 Pilot study showed that the consumption of two dietary food supplements for 12 weeks have significantly increase several type of white blood cell counts on several individuals who took the test. This study was supported by a grant from LifePharm Inc.

Dietary supplements can include food ingredients not normally consumed regularly in the standard Western diet and may clinically support health benefits for individuals.

Clinical white blood cell counts (cells/µl) show a wide range for normal, high and low cell counts, however statistical analyses were accomplished using selective statistical formulas for small sample groups. Although some tests showed large standard deviations because of the broad range of cell counts, data were generated to show probabilities of less than 0.05 and reported.

A proprietary immune support formula significantly increased total white blood cells and T cells. When a supplement of proprietary egg was added to the vitamin C regimen, B cells resulted in a highly significant increase, showing a possible enhancement effect. Both supplements indicated support to immune cells worth pursuing with a larger study.

The other supplement is a proprietary blend of a fertilized avian egg powder blended with vegetable (pea) and fish proteins (Laminine®, LifePharm Inc., Lake Forest, CA). The pilot study was designed to evaluate the clinical effects on white blood cells in subjects consuming the IMMUNE+++ supplement for 12 weeks.

Another clinical group took the IMMUNE+++ supplement together with the Laminine supplement for 12 weeks to observe effects on a standard clinical white blood cell count.

Numerous interests in healthcare today focus on the state of the human body concerning its ability to ward off unhealthy conditions and function optimally during all the years of life including during the aging process. Numerous fruits, berries, mushrooms and herbs contain antioxidants now recognized for fighting an array of inflammatory conditions.

Today’s physician focuses with his patients on diet, weight management, exercise, preventive measures, vitamin and mineral supplementation and specific nutritional components, such as bioflavonoids and antioxidants for the value these play in overall health.

An aging population presents important challenges for patients and physicians. The presence of inflammation can contribute to an accelerated aging process, comorbidities (unhealthy conditions existing simultaneously), oxidative stress and increased prevalence of chronic pain. Individuals and physicians are increasingly looking to the potential contribution of natural products and how they may help with numerous health issues including inflammatory conditions.1,2

Often inflammation is considered something to get rid of and is generally treated with medications to alleviate pain, swelling or stiffness. Primary treatment options, such as nonsteroidal antiinflammatories are used to relieve discomfort but these are not without adverse effects.1 Non-steroidal anti-inflammatory agents are known for their gastrointestinal adverse side effects and close monitoring is necessary in vulnerable populations such as the elderly.

In addition anti-inflammatory agents also disable the body’s natural ability to detoxify, repair and protect itself.1 Because of these factors, some individuals and physicians are moving towards natural approaches for improving immune function, modulating normal inflammatory responses and eliminating pharmaceutical agents.1

The free flowing egg powder has recently been assayed for positive identification of several specific bioactive growth factors and chondroitin indicating the undenatured state of the egg mixture (unpublished data, Aleksander Hinek, 2016). The bioactive egg makes up a substantial part of a blend of the dietary supplement, which also contains fish protein powder and vegetable protein powder (primarily pea) providing a full range of essential and nonessential amino acids among the other natural components.

IMMUNE+++ (LifePharm Inc., Lake Forest, CA) is a proprietary blend containing 500mg vitamin C, which has been blended with lipid metabolites providing a more bioavailable form of ascorbate than calcium ascorbate or ascorbic acid, and remains in circulation in the blood at higher levels than these other forms.

Ashwagandha, Sea Buckthorn and Pomegranate fruit extracts contain antioxidants and plant phytochemicals. Ten subjects selected from the Wellness Medical Clinic in Diamond Bar, CA were investigated by two Primary Care Medical Doctors. Criteria selection recruited subjects (18-85 yrs.) in good general health, normal vital signs and no disease symptoms. Subjects were excluded from taking other dietary supplements 2 weeks prior to the baseline blood collection and for the 12 weeks while on the supplementation regimens.

A blood sample was collected before supplementation and after 12 weeks of supplementation, then evaluated for total White Blood cells, B cells, T cells and Natural Killer cells. White blood
cells and the subset values were reported from the clinical lab reports generated for each subject. results

Sample sizes were small (n=3 or 4) for treated groups. Clinical white blood cell counts (cells/µl) show a wide range for normal, high and low cell counts; however, statistical analyses were accomplished using selective statistical t formulas for small sample groups. Although some tests showed large standard deviations because of the broad range of cell counts, data was generated to show probabilities of less than 0.05 and reported. Data was evaluated for before and after 12 weeks of supplementation with the IMMUNE+++ supplement for significant changes. 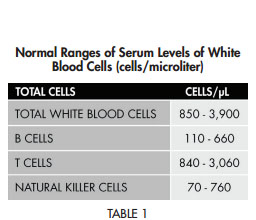 Although Group 1 took placebo tablets there were no observable significant changes. Because of the limited sample sizes, J.B. Spalding Ph.D., statistician, chose to analyze treated groups’ values against each groups’ baseline values for White Blood cells, B cells, T cells and Natural Killer cells rather than evaluating against the placebo group. 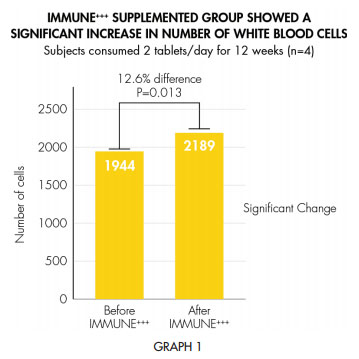 Normal Ranges of Serum levels of white Blood cells (cells/microliter). The subjects consuming IMMUNE+++ supplements for 12 weeks (Group 2) showed a 12.6% increase in total White Blood cells as compared to baseline (before IMMUNE+++), which was significant with a p=0.013 (Graph 1). 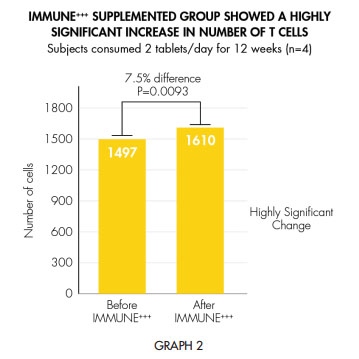 The subjects consuming IMMUNE+++ supplements for 12 weeks showed an increase of 7.5% in T cells as compared to baseline, which was highly significant with a p=0.0093 (Graph 2).

The subjects consuming IMMUNE+++ together with the Laminine supplement (Group 3) showed a 124% average increase in B cells compared to the subjects’ baseline, which was a significant change with a p=0.0139 (Graph 3). 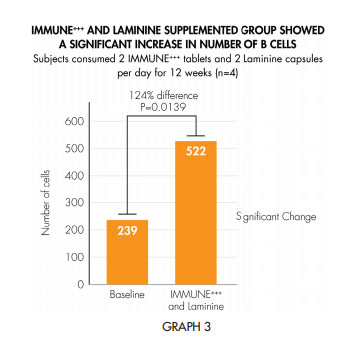 The subjects consuming IMMUNE+++ along with Laminine (Group 3) showed a 29% average increase in total White Blood cells compared to the IMMUNE+++ supplemented group, which was trending towards significance with a p=0.0765. This graph was included to show relevance to a possible trend of the enhancement effect of adding Laminine to the IMMUNE+++ product.

Natural Killer cell differences were not statistically significant in any single, supplemented group or compared to each other

In this pilot study the immune support formula (IMMUNE+++) increased the total number of White Blood cells compared to baseline after 12 weeks consumption of two capsules per day (P=0.013). In addition, the number of T cells was increased from baseline consuming the IMMUNE+++ supplement (P=0.0093).

These results indicated that IMMUNE+++ supplementation supported slight proliferation of total White Blood cells and T cells to more optimal levels, but within the normal ranges for healthy cell levels. Subjects supplementing with both IMMUNE+++ and Laminine showed an increase in total number of B cells, the largest subset of White Blood cells and responsible for antibody formation.

For many years it is recognized that there is a relationship between the health of an individual’s immune system and a lowered risk for numerous adverse health conditions. The immune system has a variety of functions to recognize, signal, inactivate and engulf cellular debris, antigens and mutated cells. White Blood cells are made in the bone marrow similar to Red Blood cells, but their life spans only last for several days as compared to Red Blood cells, which are renewed in approximately three months.

The lifespan of Neutrophils has been shown to be about 5 days in one recent study.3 With such rapid turnover and relatively short circulating times, White Blood cells need all the fortifi cation possible to continue to replicate and function optimally.3 Support for the immune system cells may be met by nutritionally fortifying the diet by providing adequate vitamin C, antioxidants, bioflavonoids, polyphenols, and such components as beta-glucans.

As the Laminine supplement contains amino acids and proteins from the fertilized egg and other protein powders it may also be supplying necessary nutrients for cellular structures. The LifePharm fertilized egg extract has numerous components such as phospholipids, growth factors, peptides, unique antioxidants, enzymes and other nutrients which may be important for metabolic and mitotic functions of immune cells.

When subjects have selectively consumed certain berries, fruits or specific nutrients they have shown slight but significant increased White Blood cell populations within normal ranges.4 Some studies indicated positive immunomodulatory effects and improved antioxidant status when consuming natural fruits, berries or mushrooms.4,5,6,8 This may be considered a positive achievement as the bone marrow is actively producing immune cells constantly.

IMMUNE+++ contains polysaccharides from the fruiting bodies of mushrooms from the classification of basidiomycetes which are traditional, medicinal mushrooms. These are now being extensively investigated for functions showing enhanced immune cell responses, anti-mutagenic activity and for immune support following chemotherapeutic treatments.

The active polysaccharides are glucans extending from homopolymers to highly complex heteropolymers of the same basic β-D-glucan structure with different types of glycosidic bonds. These mushroom polysaccharides are different in their chemical composition depending on their molecular weight, purity and degree of branched chains within the molecules.8

Fruits of Camu Camu and Acerola contain vitamin C, bioflavanoids, flavanols, polyphenols, anthocyanidins and other phytochemicals shown to have protective cellular effects, antioxidant activity and immunomodulatory functions, which may translate to antiinflammatory functions.

The consumption of the IMMUNE+++ product showed a significant increase occurring within normal ranges for healthy total White Blood cell counts and T cells. No untoward side effects were observed or reported by subjects taking the IMMUNE+++ supplement.

The group supplemented with both the Laminine and the IMMUNE+++ formula showed a possible enhanced effect over the IMMUNE+++ treated group by increasing the B cells (highly significant) and a trend towards increasing the White Blood cells (P=.076). The B cell population represents the largest subset of lymphocytes with their primary function to recognize foreign material and produce and secrete antigen specific antibodies. No untoward side effects were observed or reported in the subjects taking IMMUNE+++ with Laminine.

This pilot, proof of concept study shows an indication that the IMMUNE+++ product is quite effective in supporting White Blood cell and T cell generation within the normal healthy ranges. In addition, Laminine and IMMUNE+++ supplementation together showed an additional positive effectiveness in enhancing the B cell population more than taking the IMMUNE+++ supplement alone. Based on these encouraging observations additional larger clinical trials are warranted.

Wicky Suyanto is the formulator and producer of Laminine and IMMUNE+++ and CEO of LifePharm Inc. Lake Forest CA.

→ Watch a short video excerpt with Kimberly Purdy Lloyd M.S. presenting the study at the American College of Nutrition.