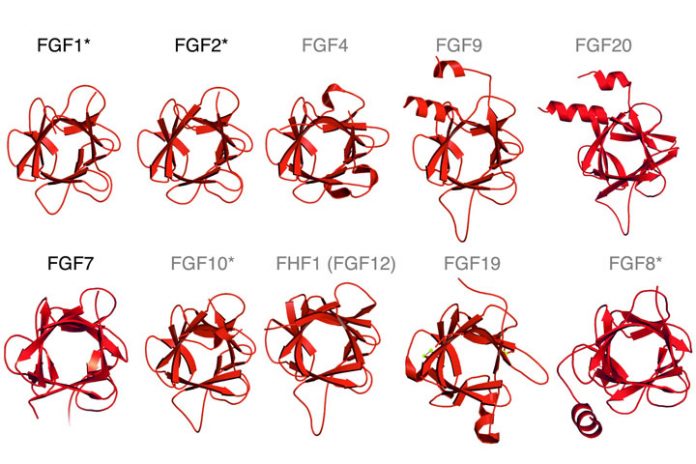 What is FGF and what does it do?

Fibroblast Growth Factors or FGF functions in adult humans as a homeostatic factor. Meaning it helps the body to respond appropriately when an injury or cell damage occurs. FGF is involved in the regulation of electrical excitability of cells and as hormones that regulate (cellular) metabolism.3

FGF is actually a family of growth factors (i.e. FGF-2 in Laminine), with members involved in angiogenesis, wound healing, embryonic development, and various endocrine signaling pathways. The FGFs are heparin-binding proteins and interactions with cell-surface-associated heparan sulfate proteoglycans have been shown to be essential for FGF signal transduction. FGFs are key players in the processes of proliferation and differentiation of a wide variety of cells and tissues. (Source: Wikipedia)

Recent discoveries suggest that FGF has multiple roles in tissue (or organ) homeostasis and repair. There are three types of signaling pathways that various subunits of the large FGF molecule activate. [1]

FGF is a signaling protein molecule or signaling pathways that basically tells cells what to do. In an injury (such as muscle or cell damage), the FGF signals protein materials to repair a damaged cell or organ tissue. FGF works with existing stem cells in the body.

Paracrine signaling is a form of cell-to-cell communication in which a cell produces a signal to induce changes in nearby cells (local action), altering the behavior or differentiation of those cells.

FGF is available in an injectable vial that is used in a stem cell therapy procedure. Another source is through a Fertilized Avian Egg Extract (FAEE) powder, where FGF is an element in this type of egg protein extract. FAEE is also known as Young Tissue Extract or YTE when it was first conceived in the 1990s.

In Laminine Food Supplement, the core ingredient is YTE which later was reintroduced as FAEE when a better process of extraction was discovered. Although it is combined with other ingredients to form the proprietary OPT9 blend, FGF-2 remains to be the most important and unique element in Laminine.

How can you make Laminine work even better for you?

The Laminine formula supplies FGF in form of capsule. The beauty of Laminine is that the FGF travels to the areas of the body that are in need of the most repair. There is a multitude of benefits provided by Laminine. That’s why Laminine consumers speak of such a wide variety of ways it helps improve health: from relieving stress to brightening skin, from gaining restful sleep to recovering more quickly from strenuous activities. Many consumers even experience clarity of mind and increased emotional balance.

What is the history of the fertilized avian egg extract found in Laminine?

The health benefits of fertilized hen egg or FAEE have been purported for centuries in China and many Asian countries based on traditional usage as a supplement for a variety of health benefits. As the egg develops after fertilization it contains an abundance of a unique array of proteins, peptides, antioxidants, immune defense factors and growth factors that are not found in other foods. [1]

An avian egg is the largest “cell” that contains, in addition to genetic information, all proteins needed as a source of amino acids for the growth of the developing chick. It is a rich source of nutrients that must support a variety of biological functions.

There is no other food similar to it in ingredient content. [1] The fertilized avian egg extract in Laminine has been boosted with the full range of additional amino acids so that during its delivery, it can continue to support protein synthesis.

Physicians like Dr. John Ralston Davidson in the early 1900s, used fertilized avian extract to support the health and well being of their patients. Nearly 50 years later in Norway, Dr. Bjodne Eskeland began doing investigational studies on fertilized avian egg extract to find it had a special combination of amino acids, peptides and protein fractions that could provide an incredible array of health benefits when consumed by humans. Dr. Eskeland later teamed up exclusively with LifePharm Global to formulate Laminine.

Scientific research is now uncovering the bio-ingredients that give the fertilized nine-day avian egg its unique properties. There has been great interest during the past decades in the changes that occur during this development process and in the composition of the egg. [2]

→ Summary of clinical studies of Laminine in PDR.
→ Laminine on cholesterol and triglycerides.
→ White paper study on white blood and T-cells.
→ Clinical study on muscle mass and strength.

The challenge in keeping the nine-day fertilized avian egg extract intact during processing of the egg at this early development stage has been conquered by LifePharm Global through the exclusive use of an evaporative cooling technique. This technique keeps the peptides and growth factors intact without denaturing them. Denaturing refers to the process of changing the structure and function of proteins. Because these growth factors and peptides are important to attach to receptor sites on cells to activate cellular functions, it is of utmost importance to maintain the natural structure and integrity of these components.

They fit like lock and key and if the key is bent, so to speak, it will not fit the receptor sites to activate certain cell functions. The uniqueness of the special isolation and “no heat” processing of LifePharm Global nine-day fertilized avian egg extract assures these components are intact.

LifePharm working towards the perfect combination

Now Laminine can work even better. Why? Because taking Laminine OMEGA+++, DIGESTIVE+++ and IMMUNE+++ may help you keep the various systems of the body working as smoothly as possible. Then when Laminine targets the weaker areas of the body, it can work in tandem with the other products for quicker results. Why wait until your body is in distress when you can keep it functioning at its best by taking the four powerhouses of LPGN every day?