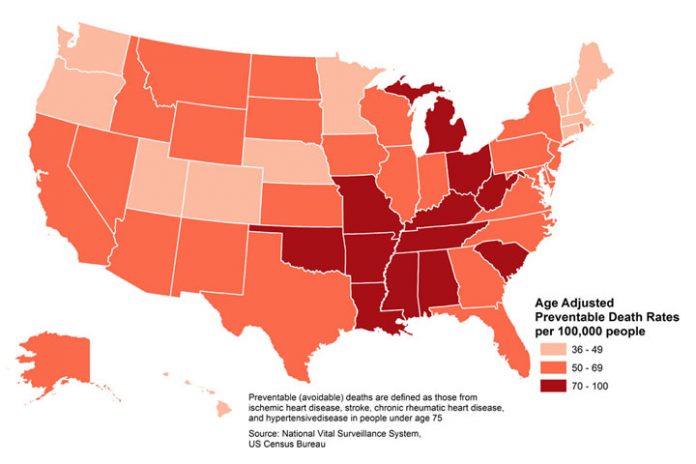 Latest heart and stroke statistics in the U.S.A.

An American dies from a heart-related disease every 40 seconds. Heart disease is still the No. 1 cause of death in the world and the leading cause of death in the United States, killing over 375,000 Americans a year. Worldwide, about 17.3 million die each year and that number is expected to increase to more than 23.6
million by 2030.

Stroke, in particular, is the second-leading global cause of death behind heart disease, accounting for 11.13% of total deaths worldwide. Stroke is the No. 5 cause of death in the United States, killing nearly 129,000 people a year. The data from the heart institute also shows that stroke kills someone in the U.S.A. about once every four minutes.

White Americans are also not alone, African-Americans have nearly twice the risk for a first-ever stroke than white people, and a much higher death rate from stroke.

Over the past 10 years, the death rate from stroke has fallen about 35 percent and the number of stroke deaths has dropped about 21 percent. About 795,000 people have a stroke every year and someone in the U.S.A. will suffer stroke about once every 40 seconds. In fact, stroke causes 1 of every 20 deaths in the U.S resulting into disability.

Most of the disabled Americans we have today suffered a stroke, which makes it the leading cause of disability.

Consider the the following statistics and facts from the American Heart Association: ● 60% of adults don’t know their blood pressure or cholesterol numbers.
● 56% of adults have been told to improve their health.
● 83% believe heart attacks & stroke can be prevented but doesn’t do anything.
● 99% of Americans need to improve their heart health.
● 72% this 92% don’t consider themselves at risk for heart disease.
● 56% put no effort into improving their heart health.

Major cause and what can you do?

We all know that diet plays an important role in the proliferation of this disease. However, the lack of exercise by most Americans have bolstered the disease. Overweight or obese American is becoming the norm, a far cry from a hundred years ago when food was grown naturally.

While eating more than what our body needs causes obesity, it’s actually the lack of physical activity or regular exercise that causes extreme overweight. Consider farmers a hundred years ago who had to work manually with everything. They perspire a lot, their heart rate increased – in other words, they are burning what they eat. This is the exact opposite of Americans today. Worse, the food we eat is laced with sugar – and sugar plays a major role in obesity.

The solution is actually very simple – exercise and burn what you eat!

About 2,150 Americans die each day from these diseases, one every 40 seconds. The cause is clear and for many, it seems too late. It is not easy to lose weight and shed pounds, in the hope that the cholesterol will go away with them. This is especially difficult for those age 40 and above whose metabolism has slowed down.

Even with very little food intake, given one’s metabolic rate and genetic predisposition, it is difficult to control cholesterol that contributes to heart disease. This is the reason why LifePharm Global Network introduced Laminine Omega+++. Since Laminine is known to address several health issues of the body, Omega+++ was formulated to melt cholesterol and encourage a healthy heart. Clinical test shows the effects of Laminine Omega+++ to those taking it for their heart. The result shows that individuals that have high triglycerides, doubling the intake of Laminine and Laminine OMEGA+++ can yield a drastic improvement in a short period of time.

From data found in the website of PDR.net on Laminine, we see that Laminine OMEGA+++ helps to lower cholesterol, LDL and triglyceride and blood pressure levels, but when taken with Laminine, the decreases are more significant as a whole.

The perfect combination of taking Laminine (original) and Laminine Omega+++ will not only help maintain a healthy heart but encourage existing stem cells of the body to encourage homeostasis, especially as we age. The key ingredient – FibroBlast Growth Factor or FGF is known to revitalize damaged or aging cells and organs.