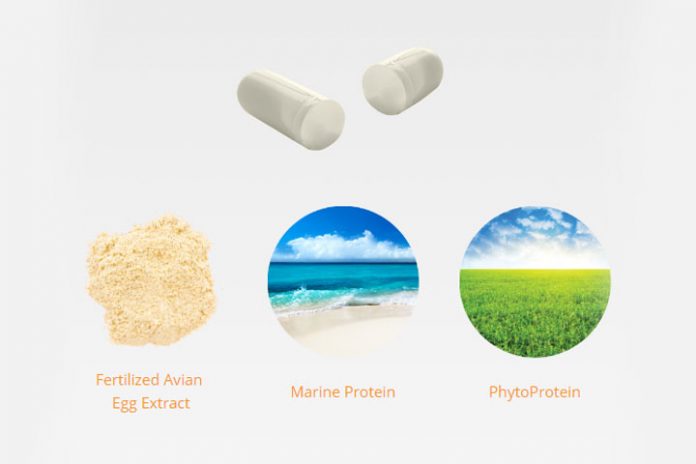 Also known as Fertilized Chicken Egg Tissue Extracts, this core ingredient of Laminine was originally discovered by Dr. John Ralston Davidson in 1929, a Canadian doctor who was looking for a cancer cure for his patients.

Some fifty years after, the ingredient was referred to as Young Tissue Extract (YTE) by Dr. Bjodne Eskeland, a Norwegian doctor who continued on with the research and found a better way to extract the ingredient. He too believed that the egg extract can positively influence cellular health.

By the mid-1990s, YTE research gained medical popularity. It was even featured in Canada TV as a documentary on cancer-cure, where it was referred to as an important discovery that has been clinically tested and found to influence cell repair, restoration, and proliferation.

Since early 2012, LifePharm Global Network has sourced its Fertilized Avian Egg Extract from organic, cage-free, hormone-free chicken farms in the United States, which is then developed with the process of Hygienic Evaporative Cooling Technology.

When this method was discovered, converting the Fertilized Avian Egg Extract from a liquid to a powdered form made it possible to harvest the peptides from egg in its most purest, potent, and concentrated form.

This technology is exclusive to LifePharm Global Network and was not readily available anywhere else in the world besides the United States. Previously, LPGN sourced its Fertilized Avian Egg Extract from Norway, but the change occurred in order to ensure the quality, traceability, and supply of materials. The laws governing avian products are especially stringent in the U.S.A., and LifePharm Global Network prides itself on operating under FDA and GMP guidelines.

This proteins extract comes from fish, sea (vegetable) plants, & yellow pea. Fish extracts are from shark cartilage. Cartilage is flexible tough elastic tissues. The extract are known to fight cancer and provide as an agent to increase immunity, arthritis, psoriasis, wound healing, inflammation of the intestine, and damage to the retina of the eye due to diabetes.

The vegetable proteins in Laminine are extracts from sea plants and yellow pea. Yellow pea, in particular, is known to bind up cholesterol-containing bile and move it out of your body. This can help with conditions like irritable bowel syndrome and diverticulosis.

The ingredients of Laminine includes 20 + 2 complete full chains of amino acids, where 8 are essential to our body’s daily need for repair, energy, and recovery. Laminine’s unique and patented ingredient base – OPT9™ that contains Fibroblast Growth Factor (FGF), found in the extract has been proven by science to promote cellular health. Combined with other vitamins and minerals that are sourced organically, Laminine is presented as the best and ideal supplement when it comes to maintaining and promoting homeostasis. All of the ingredients found in Laminine is generally recognized as safe by the FDA (GRAS).

READ MORE – The Science Behind OPT9™