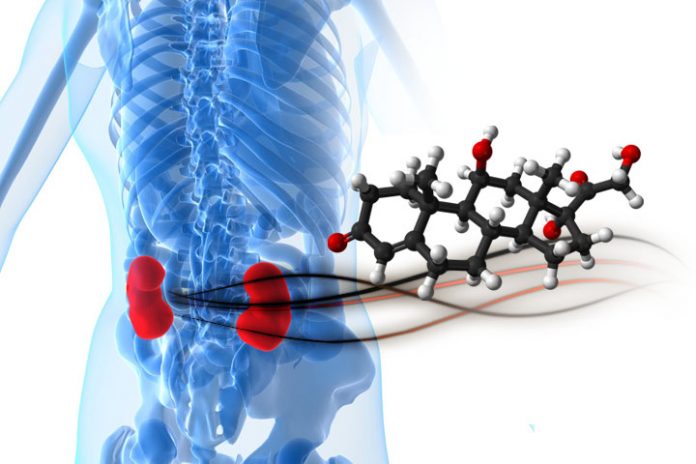 Cortisol or the ‘stress hormone’ is a steroid hormone produced by our body. More specifically, it is a Glucocorticoid (glucose + cortex + steroid or GCs). It is produced in the adrenal cortex (a gland just above the kidney). GCs is released in our body as our response or to tolerate stress. It is the body’s defense mechanism that increases blood sugar and aids the metabolism of fat, protein, and carbohydrate. It suppresses the immune system to reduce any form of inflammation.

Glucocorticoid or GCs can be used as medicine to treat diseases caused by over-active immune systems. When our immune system is highly active, we may experience allergies, asthma, even sepsis.

Cortisol is normally at higher levels in the morning, and at its lowest at night. This is obviously because we’re stressed at the start of the day and more relaxed as evening approaches. Although stress isn’t the only reason that cortisol is secreted into the bloodstream, it has been referred to as “the stress hormone” because it’s also secreted in higher levels when we’re stressed.

Why we should maintain low levels of Cortisol

While Cortisol is an important and helpful part of the body’s response to stress, it’s important that the body’s relaxation response to maintain or lower Cortisol should be done so as not to trigger its negative side effects to the body. Unfortunately, this is usually not the case for those working 12 hours a day. Some of these stress affects even in dreams, resulting in the inability to have restful and longer rest. The negative side effect outweighs the benefit of having a raised Cortisol, where the need to lower or control should immediately be done. When Cortisol levels decline, we feel more relaxed.

As we age, the body produces more and more cortisol. An old person close to the death will get a high level of cortisol – Dr. Bjodne Eskeland

According to Wikipedia, the effect of increased and prolonged levels of cortisol weakens the immune system. Its effects include decrease bone density, a decrease in muscle tissue, higher blood pressure, lowered immunity and inflammatory responses in the body, slowed wound healing.

Cortisol and the stress response have known deleterious effects on the immune system. High levels of perceived stress and increases in cortisol have been found to lengthen wound healing time in healthy, male adults. Those who had the lowest levels of cortisol the day following a 4 mm punch biopsy had the fastest healing time.[36] In dental students, wounds from punch biopsies took an average of 40% longer to heal when performed three days before an examination as opposed to biopsies performed on the same students during summer vacation. [A]

Cortisol reduces bone formation that may encourage long-term development of osteoporosis. It transports potassium out of cells in exchange for an equal number of sodium ions. Cortisol also reduces calcium absorption in the intestine preventing it to nourish bones. Cortisol reduces bone formation, favoring the long-term development of osteoporosis. [C]

Cortisol and the stress response have known deleterious effects on the immune system. High levels of perceived stress and increases in cortisol have been found to lengthen wound healing time in healthy, male adults. Those who had the lowest levels of cortisol the day following a 4 mm punch biopsy had the fastest healing time. [D]

Although GCs increases the body’s ability to metabolize fats, it also increases your appetite and cravings. Chronic stress studies show that it can cause abdominal fat to increase – even in people who are otherwise thin. Researchers at Yale University, for example, found slender women who had high cortisol also had more abdominal fat. More results published in the journal of Psychosomatic Medicine in 2000 established a link between cortisol and increased storage of abdominal fat.

What you can do to lower the stress hormone

To keep cortisol levels healthy and under control, the body’s relaxation response should be activated after the fight or flight response occurs. You can learn to relax your body with various stress management techniques, and you can make lifestyle changes to keep your body from reacting to stress in the first place.

The following have been found by many to be helpful in relaxing the body and mind thus maintaining healthy cortisol levels:

1. Paradigm shift – If you can’t change your environment, you can shift your mindset and look things in the opposite perspective. Ask yourself – what could be worse than what’s happening? – This may help you appreciate the stressful environment or situation you’re currently stuck with.

2. Exercise – While this may cause you to perspire or get tired, the hormone released during this activity is not cortisol. Instead by exercising (such as jogging), our brain begins to release hormones that relax us (such as Serotonin). Simply by looking at the road, sky or trees causes our brains to relax.

3. Read self-help, spiritual disciple, or even the Christian Bible – Study shows that taking the time to read not only relaxes the body (since you’d just be stationary) but also releases hormones that relax the brain.

4. Take a supplement – Laminine food supplement is clinically proven to control Cortisol levels after 12 days of taking Laminine. In fact, more users have experienced lesser stress, calmer mood, and better sleep than taking hormone pills or yoga whose (relaxing) effects do not last.

As supplement for Adrenal fatigue

Laminine can help by providing the amino acid chain needed to boost energy and eliminate fatigue. When the adrenal glands function below the necessary level, this is usually associated with prolonged stress (high cortisol). Laminine helps to maintain, control or lower levels of cortisol.

If the patient’s condition is related to Addison’s disease, where the adrenal glands do not produce enough cortisol, Laminine being an adaptogen help balance these hormones to an optimum level to reach homeostasis.

Laminine is clinically proven to reduce the stress hormone (Cortisol)

This study was designed to ascertain the effect of the nutritional supplement, Laminine on cortisol levels in the body. During the experiment, 28 subjects, 16 women and 12 men, between the ages of 36 and 83 took part in the study.

Overall, study participants’ cortisol levels were reduced by an average of 23.7 percent, where 16 started on a higher intake of Laminine—four capsules, twice a day—and 12 started on one capsule twice per day.

Participants that initially started on a higher intake of Laminine saw their cortisol level reduced significantly over the first four days as compared to subjects that began the study with a lower usage amount. However, at the end of the study, there was a small, although insignificant, the difference for the high initial intake.

Therefore, taking Laminine as a daily supplement is enough to reduce the stress hormone, Cortisol.